­­10 NAFTA takeaways to consider in the TPP 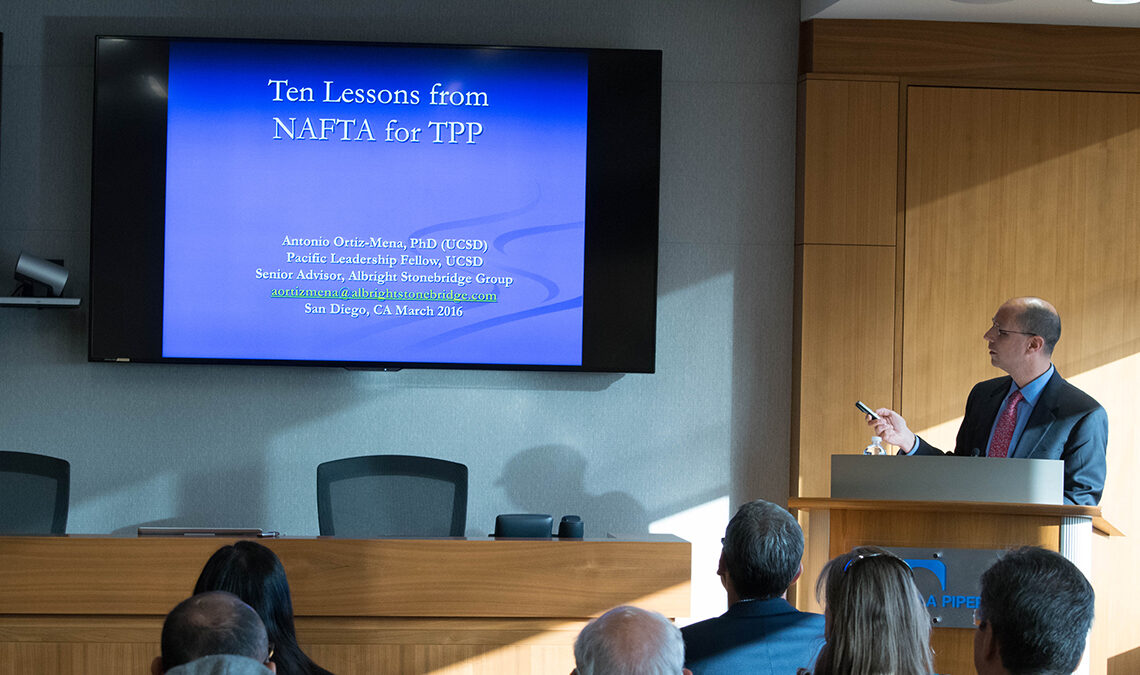 As part of the San Diego Global Forum, PLF Antonio Ortiz-Mena listed 10 lessons we can use from NAFTA in implementing the TPP

On the heels of the Trans-Pacific Partnership (TPP) signing in February 2016, the UC San Diego School of Global Policy and Strategy (GPS) fittingly welcomed Antonio Ortiz-Mena for a lesson—10 lessons, in fact—on what countries can learn from the North American Free Trade Agreement (NAFTA) in implementing the TPP.

Ortiz-Mena, a senior advisor at Albright Stonebridge Group (ASG), began his career in the Mexican government, where he held multiple senior advisory roles in the NAFTA Negotiation Office of the Ministry of Trade and Industrial Development, the Budget and Programming Ministry and the Ministry of Fisheries. Prior to joining ASG, he served for more than eight years as the head of economic affairs at the Embassy of Mexico in the U.S. He earned his Ph.D. from UC San Diego and has taught as a professor of international affairs at the Center for Economic Research and Teaching in Economics.

During his Pacific Leadership Fellowship (PLF) at GPS’s Center on Global Transformation, Ortiz-Mena presented “What does NAFTA have to teach us about the TPP?” at the School’s second San Diego Global Forum on March 30 at DLA Piper. A collaboration between the School, World Trade Center San Diego and the San Diego Regional Economic Development Corp.’s Go Global San Diego initiative, the forum facilitates open dialogue to unveil how San Diego is engaged in shaping solutions for a transforming and interconnected world.

Here are his 10 takeaways.

1. Use organization of negotiation for ratification and implementation

He noted Congress(es) also gave little thought to complementing legislation that would bring forth additional initiatives to make better use of the agreement, particularly on infrastructure.

“CEO buy-in,” he said, is crucial for implementation. “Not a lot gets done unless the CEOs of powerful corporations put their weight behind initiatives.”

2. Do not oversell or undersell the agreement

“To be frank, most international economists are still debating these issues,” he said. “They agree that international trade fosters a more efficient use and allocation of factors of production, but there are so many factors affecting employment, GDP growth and migration—including demographics, technological change, fiscal and monetary policies, end exogenous shocks, among others—and it is difficult to disentangle complex causality.”

On underselling, there were “things we didn’t underscore that we should have underscored.” He said Mexico did not emphasize enough how small and medium enterprises could gain from the agreement from participating in the supply chains of large corporations, without the need to export directly. Likewise, attaining a defense against unilateral actions by the U.S. by having recourse to a NAFTA Chapter 19 panel on unfair trade practices was a big gain, as were rules of origin that fostered local sourcing.

3. Ensure clarity of aims and maintain a holistic vision

“It’s important to have a small, clear and coherent narrative about what the agreement is about and how it fits together with the overall government strategy,” Ortiz-Mena said. “Avoid equating a trade agreement with the government’s overall development strategy and foreign policy. It is merely a specific instrument to foster trade and investment, no more and no less.”

Using as example how American Express promotes its members as having “privileges,” Ortiz-Mena encouraged countries to consider whether they want to be a part of the TPP “club” because of the benefits or because it’s a defensive strategy, essentially avoiding the cost of not being a member while other major players in international trade are.

Exclusions are part of the defensive aims of trade negotiations, Ortiz-Mena explained. In the case of Mexico, the government decided to exclude its hydrocarbon sector in NAFTA for political reasons. “How did we manage that? We made a tradeoff of a defensive aim against a defensive aim of the U.S. (migration),” he said, noting, of course, the U.S. rebutted and negotiations continued.

“Everyone needs to make tradeoffs in a negotiations, but it is best to make defensive tradeoffs against a defensive aim of the counterpart and not one of your offensive (market access) aims.”

5. Focus on permanent rules, not on temporary ones

Temporary rules such as tariff reduction rates are “very attractive for politicians, the press and pundits because it’s easy to keep score,” Ortiz-Mena said, clarifying that tariffs usually are negotiated by how many years it takes them to go down to zero.

“But trade does not work like that,” he said. “At the end of the day, everyone will be at zero and it is the permanent rules that will remain.”

Permanent rules are “unattractive” for punditry because they’re “super complex and super boring,” Ortiz-Mena said, but these rules are critically important. For instance, rules of origin specify what goods can receive preferential duty treatment. Commitments on norms and standards, and regulatory cooperation also fall in this category.

Opposing John Maynard Keynes, who famously said, “In the long run we are all dead,” Ortiz-Mena amended the economist to comment on trade negotiations: “In the long-term, you will not be dead. You will be in trouble.”

He warned countries to be careful of long-term tariff reductions of 10 years or, exceptionally, 15 years. “What items are left for tariff liberalization at 10 or 15 years? The most sensitive products,” he explained. “A lot of people equate 15 years with never, so they do nothing to protect those sensitive sectors. The long time allotted is a double-edged sword”

7. Beware of ‘clarifications’ and ‘fixes’

Quoting the late baseball star Peter “Yogi” Berra’s “It ain’t over till it’s over,” Ortiz-Mena delved into where the TPP is right now—with several interest groups asking for clarifications, or fixes, even though the agreement has been initialized.

In the case of Mexico and NAFTA, he explained, there was a “clarification” over sugar, allegedly to clarify the scope and coverage of NAFTA commitments on market access for sugar, with an exchange of letters between U.S. Trade Representative Mickey Kantor and Mexican Trade Minister Jaime Serra.

“One of the toughest fights at the embassy over the past few years was sugar,” he said. “Clarifications are not sugar-coated.”

8. Implement measures to maximize benefits of the agreement

Disagreeing with the Rolling Stones song “Time is on my side,” Ortiz-Mena said: “Trade agreements are inert. If you don’t do anything with them, they are  just a pile of papers.”

He added that for NAFTA, no government or business leaders dared to establish quantifiable goals. “It’s important to have government, academia and business discuss where they think the agreement presents opportunities for a county and to see how they think they can take advantage,” he said. “If you establish some overall goals, it will help focus energies and coordination.”

In addition, to take full advantage of agreements they must be complemented with domestic policies to bolster trade, from radically cutting red tape to bolstering trade-related infrastructure. These measures will be essential to help SMEs participate in international trade, he said.

9. Acknowledge costs of the agreement and address them

“Trade agreements have winners and losers, especially in the short term,” Ortiz-Mena said. “In the medium and long term, everyone should be better off. But those sectors that will be adversely affected have to be recognized.”

He used the U.S.’s Trade Adjustment Assistance (TAA) as an example. TAA provides support to workers displaced by international trade.

Ortiz-Mena also highlighted the needs to protect markets against unfair trade practices. He praised the U.S. and Mexico’s customs agencies cooperation as a successful example of preventing counterfeit and contraband in international trade. “That could be an example to follow and one potential area for cooperation from other TPP countries.”

He also noted the need to have domestic agencies in charge of assessing unfair trade practices (dumping and subsidies) that are up to the task in terms of human and financial resources and technical expertise.

10. Present the agreement in context and keep pedaling the bicycle

“Making the best use of an agreement is a permanent task, an ongoing challenge,” he said, adding countries always must think of infrastructure and trade volumes increase.

Referencing the Port of San Diego interacting with Ensenada and the new pedestrian crossing at the Tijuana airport, Ortiz-Mena touched on an area of “greatest potential” in trade agreements, particularly NAFTA.“Our geography is our advantage, it’s not our problem,” he said. “I encourage you all to think of yourself as Tijuanans, San Diegans, to think and act regionally, and also as North Americans.”